UFOs and the Bible

Angels, "Aliens", and Demons-- a biblical look at a cosmic battle

Is it possible that the UFO phenomenon is actually a glimpse of the battle raging in the hidden spiritual realms as the struggle makes brief forays into this earthly sphere?

The Bible teaches that there are angels and demons and there is warfare in the heavenly realms. The demons are the fallen angels that once followed God, but later rebelled with Satan and turned against the Lord.

For our struggle is not against flesh and blood, but against the rulers, against

the authorities, against the powers of this dark world and against the

spiritual forces of evil in the heavenly realms.

And there was war in heaven. Michael and his angels fought against the dragon, and

the dragon and his angels fought back. But he was not strong enough, and they lost

their place in heaven.

…But woe to the earth and the sea,
because the devil has gone down to you!
He is filled with fury,
because he knows that his time is short.

Just what are angels? The Bible tells us angels are “ministering spirits” (Hebrews 1:14). It tells us they are beings of a different nature than humans, but created by God and for God. It describes how they sometimes act, how they sometimes appear, and how they are sometimes perceived. It also tells us what they sometimes do. If one studies all the passages in the Bible that mention angels, one will see that angels are very powerful spiritual beings that, among other things, can:

In other words, angels can take on many different shapes and forms, perhaps at will. It would make sense then, that if demons are fallen angels, they may possess many of the same powers that the faithful angels possess.

Many people who have encountered “aliens” describe a reptilian likeness to their appearance. It is curious to note that when Satan appeared to Eve in the garden of Eden that he appeared in the form of a snake—probably the first thing that comes to mind when you hear the word “reptile”.

A few people will follow the devil with full knowledge of who he is. Others, being deceived, follow him without knowing whom they really serve. To those that seek Christ, one of the devil’s favorite ploys is to masquerade as an imposter, preaching and teaching lies, false doctrine and false Christianity:

2 Corinthians 11:13-15
For such men are false apostles, deceitful workmen, masquerading as apostles of Christ.

And no wonder, for Satan himself masquerades as an angel of light. It is not surprising,

then, if his servants masquerade as servants of righteousness. Their end will be what

in all kinds of counterfeit miracles, signs and wonders, and in every sort of evil that

deceives those who are perishing. They perish because they refused to love the truth

and so be saved. For this reason God sends them a powerful delusion so that they will believe the lie and so that all will be condemned who have not believed the truth but

have delighted in wickedness.

How do we protect ourselves against the devil’s schemes?

Finally, be strong in the Lord and in his mighty power. Put on the full armor of God so that you can take your stand against the devil's schemes. For our struggle is not against flesh and blood, but against the rulers, against the authorities, against the powers of this dark world and against the spiritual forces of evil in the heavenly realms. Therefore put on the full armor of God, so that when the day of evil comes, you may be able to stand your ground, and after you have done everything, to stand. Stand firm then, with the belt of truth buckled around your waist, with the breastplate of righteousness in place, and with your feet fitted with the readiness that comes from the gospel of peace. In addition to all this, take up the shield of faith, with which you can extinguish all the flaming arrows of the evil one. Take the helmet of salvation and the sword of the Spirit, which is the word of God. And pray in the Spirit on all occasions with all kinds of prayers and requests. With this in mind, be alert and always keep on praying for all the saints.

For the accuser of our brothers,
who accuses them before our God day and night,
has been hurled down.

They overcame him
by the blood of the Lamb
and by the word of their testimony;
they did not love their lives so much
as to shrink from death.

Even in the Old Testament, God knew how great the temptation would be, and warned numerous times not to follow any other beings except Him:

Exodus 20:3
You shall have no other gods before me.

Be careful to do everything I have said to you. Do not invoke the names of other gods;

do not let them be heard on your lips.

Deuteronomy 5:7
You shall have no other gods before me.

Deuteronomy 6:14
Do not follow other gods, the gods of the peoples around you;

If a prophet, or one who foretells by dreams, appears among you and announces to you

a miraculous sign or wonder, and if the sign or wonder of which he has spoken takes place, and he says, "Let us follow other gods" (gods you have not known) "and let us worship them,"  you must not listen to the words of that prophet or dreamer. The LORD your God

It is the LORD your God you must follow, and him you must revere. Keep his commands

and obey him; serve him and hold fast to him.

The terms, “heavenly hosts”, or the “host of heaven” are frequently used in reference to angelic beings.

the place of Tophet, because of all the houses upon whose roofs they have burned incense

to all the host of heaven, and have poured out drink offerings unto other gods.

Deuteronomy 17:2-4
If there is found among you, within any of your gates which the LORD your God gives

you, a man or a woman who has been wicked in the sight of the LORD your God, in

transgressing His covenant, who has gone and served other gods and worshiped them,

either the sun or moon or any of the host of heaven, which I have not commanded, and

it is told you, and you hear of it, then you shall inquire diligently. And if it is indeed true

and certain that such an abomination has been committed in ,

Ancient ’s history is full of times when they sought after and embraced other gods and the “host of heaven”. In so doing, they abandoned God and His blessings, guidance, and protection--and paid a terrible price. These times were ’s darkest hours. See: 2 Kings 17:15-17, Kings 21:2-5, 2 Kings 23:4-6.

Remember, no matter what these “aliens” may say or teach, Jesus Christ is the only way to God:

Salvation is found in no one else, for there is no other name under heaven given

to men by which we must be saved.

Jesus answered, "I am the way and the truth and the life. No one comes to the

Father except through me.

God has given proof of Jesus as being His Son to all men, for all time:

Paul, a servant of Christ Jesus, called to be an apostle and set apart for the gospel of God—the gospel he promised beforehand through his prophets in the Holy Scriptures regarding his Son, who as to his human nature was a descendant of David, and who through the Spirit of holiness was declared with power to be the Son of God by his resurrection from the dead: Jesus Christ our Lord.

In the past God overlooked such ignorance, but now he commands all people everywhere to repent. For he has set a day when he will judge the world with justice by the man he has appointed. He has given proof of this to all men by raising him from the dead.

But in the end Jesus Christ will triumph over all evil:

For the secret power of lawlessness is already at work; but the one who now holds it back will continue to do so till he is taken out of the way. And then the lawless one will be revealed, whom the Lord Jesus will overthrow with the breath of his mouth and destroy by the splendor of his coming.

1 Corinthians 7:31
…. For this world in its present form is passing away.

But the day of the Lord will come like a thief. The heavens will disappear with a roar; the elements will be destroyed by fire, and the earth and everything in it will be laid bare. Since everything will be destroyed in this way, what kind of people ought you to be? You ought to live holy and godly lives as you look forward to the day of God and speed its coming. That day will bring about the destruction of the heavens by fire, and the elements will melt in the heat. But in keeping with his promise we are looking forward to a new heaven and a new earth, the home of righteousness.

Then Jesus came to them and said, "All authority in heaven and on earth

Has been given to me.

But when this priest had offered for all time one sacrifice for sins, he sat down at the right hand of God. Since that time he waits for his enemies to be made his footstool, because by one sacrifice he has made perfect forever those who are being made holy.

Therefore God exalted him to the highest place
and gave him the name that is above every name,
that at the name of Jesus every knee should bow,
in heaven and on earth and under the earth,
and every tongue confess that Jesus Christ is Lord,
to the glory of God the Father.

And that includes not just us humans, but Satan and his deceptive followers as well…

What is more important?

--That God came to earth, revealed Himself to us, told us the truth and lived among us as one of us, gave His life for us, left us the gift of His Spirit, and will return,

that so called “aliens” visit, tell us lies, and leave?

Are you saved? Many people think they are—and are not. Are you certain the Bible agrees with what you have been taught regarding how to be saved? Find out what the Word of God teaches about salvation. Click here and visit www.bebaptized.org

The Kingdom of Heaven is Here 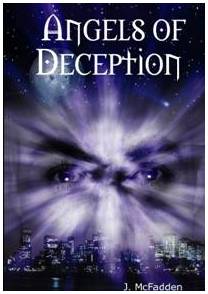 ANGELS OF DECEPTION – Between Heaven and Hell: A look at the UFO phenomenon through the eyes of the Bible

Throughout all of history odd lights, strange apparitions and mystifying beings have appeared to mankind in the skies above and on the earth below. In 1942 C.S. Lewis wrote The Screwtape Letters—5 years before the first wave of “flying saucer” sightings began to hit the in earnest. In one particular letter to “Wormwood”, the imaginary character, Screwtape, writes that he has “great hopes that we shall learn in due time how to emotionalize and mythologize their science to such an extent that what is, in effect, a belief in us (though not under that name) will creep in while the human mind remains closed to belief in the Enemy.” C.S. Lewis had some amazing insight into the enemy’s strategy that was soon to follow. Angels of Deception—Between Heaven and Hell, is a startling and revealing look at the UFO phenomenon through the eyes of the Bible.