After his suffering, he showed himself to these men and gave many convincing proofs that he was alive.

He appeared to them over a period of forty days and spoke about the .

On one occasion, while he was eating with them, he gave them this command: "Do not

leave , but wait for the gift my Father promised, which you have heard me speak

Spirit." Therefore, when they had come together, they asked him, "Lord, are you now

restoring the kingdom to ?"  And he said unto them, It is not for you to know

times or seasons, which the Father hath set within His own authority. But you shall receive

power at the coming of the Holy Spirit upon you, and you shall be witnesses to me both in

Jerusalem, and in all Judea, and Samaria, and to the ends of the earth.'

The events that kings and prophets had longed to see, indeed, the things even angels wanted to look into were about to happen. The kingdom, spoken of by both Jesus and John the Baptist that was just around the corner, was now about to finally come.

Then he said to them, "These are my words which I spoke to you, while I was still with you, that everything written about me in the law of Moses and the prophets and the psalms must be fulfilled." Then he opened their minds, that they might understand the Scriptures. He said to them, "Thus it is written, and thus it was necessary for the Messiah to suffer and to rise from the dead the third day, and that repentance and forgiveness of sins should be preached in his name to all the nations, beginning at . And you are witnesses of these things. And behold, I am sending forth the promise of My Father upon you; but you are to stay in the city of Jerusalem until you are clothed with power from on high.

Jesus was telling the Twelve that in a few days they would receive the promised gift when in .

John the Baptist also spoke of this (in all four Gospels):

“I indeed baptize you in water into repentance: but he that comes after me is mightier than I, whose shoes I am not worthy to bear: he shall baptize you in the Holy Spirit and in fire”

So, putting these together we find: something very big is about to happen:

n      Repentance and forgiveness of sins will be preached

n      Clothed with power from on high

n      Jesus will send the promise of the Father

We also know from Matthew 16:19 that Christ gave Peter the keys to the kingdom of heaven…so the points listed above will involve Peter as well.

The stage was now set.

And it all came together at Pentecost… 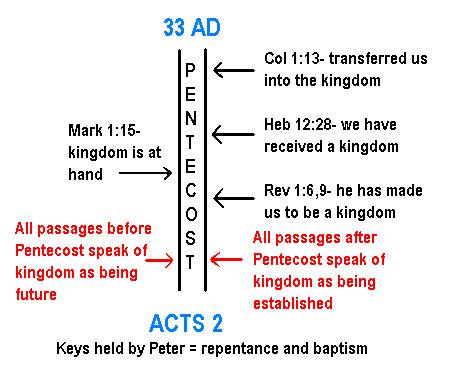